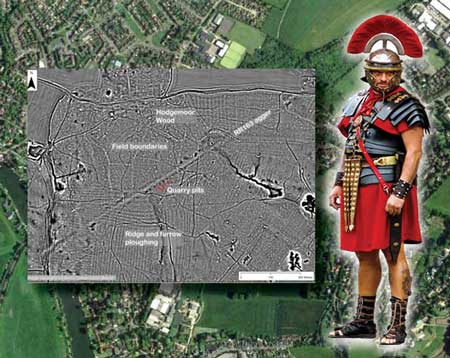 What did the Romans ever do for Bourne End?

An Online Zoom talk
Thursday 21 October @ 8pm
By: Nigel Rothwell and Ed Peveler, Chilterns Conservation Board ‘Beacons of the Past’ project

Did the Romans build a road and a crossing here, and what is the evidence?

We will look at some of the characteristics of ‘known’ Roman Roads within the Chilterns and illustrate how the ‘Beacons of the Past’ LiDAR data has helped reinterpret some of these. We will also explore the discovery of a new alignment of Roman Road in Hodgemoor Wood (Seer Green) on the likely route between Verulamium and Silchester.

The accompanying illustration is a LiDAR image of the best-preserved section of Roman Road within the Chilterns. Its route can be traced with some confidence through Buckinghamshire, but the point, or points, at which it crosses the Thames, and its continuation through Berkshire, remain unproven. However, a potential candidate for the route is along the Wye valley to Bourne End.